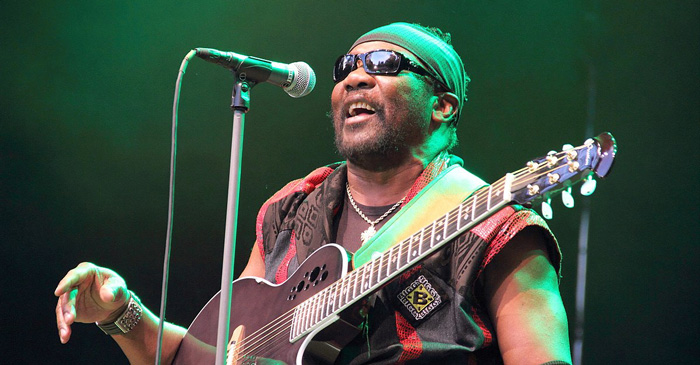 Toots Hibbert is a Jamaican ska and roots reggae singer, best known as the leader of the reggae vocal group Toots and the Maytals. His soulful style and vocal prowess has often been compared to that of Otis Redding.

Hibbert is a noted multi-instrumentalist who plays almost every instrument used in his band.

Born in May Pen, Jamaica on 8 December 1942, he was the youngest of seven children. His family relocated to Kingston in the early 1960s when Hibbert was still a teenager.

Although Toots Hibbert comes from a Jamaican background, his raspy, resilient voice contains elements of Nashville soul circuit as well as Mandeville soul revival. He started singing gospel music in a church choir from a young age.

He became a well-known name in Jamaican popular music in the 1960s as a member of The Maytals. The group became one of the most popular musical acts in Jamaica. Three of Hibbert’s songs – “Bam Bam” (1967), “Sweet and Dandy” (1969) and “Pomps & Pride” (1972) – became huge nationwide hits. The band received the Grammy Award for best reggae album in 2004.

Hibbert is credited as one of the first musicians to use the word “reggae” in his 1968 song “Do The Reggay”. He appeared as a judge for the 10th annual Independent Music Awards in 2014.

Toots Hibbert was conferred with Jamaica’s fifth highest honour, the Order of Jamaica, in 2012.

Toots Hibbert and his wife Doreen married as teenagers. He wrote both “It’s You” and “Never You Change” for his wife when she was only 18 years old.