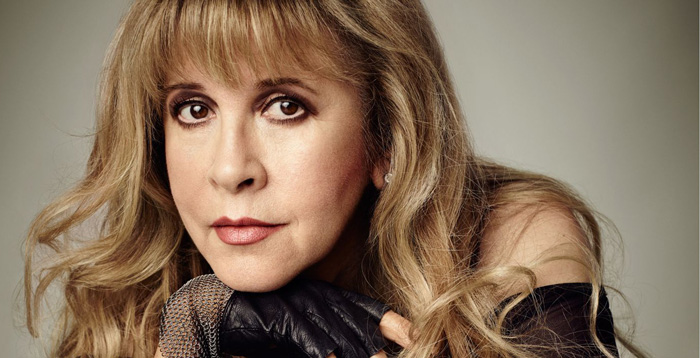 Stevie Nicks is an American singer-songwriter and musician, best known for her work with Fleetwood Mac and a successful solo career, which has collectively spawned over forty Top 40 hits and sold over 140 million albums worldwide. Known for her mystical persona and a seductive yet powerful contralto vocal range, she is often considered as one of the most iconic female performers in rock music.

Born “Stephanie Lynn Nicks” on May 26, 1948 in Phoenix, Arizona, her grandfather, Aaron Jess Nicks, was a struggling country music singer who taught her to sing and started performing duets with her when she was only 4 years old.

Stevie Nicks joined her first band, “The Changing Times”, as a student at the Arcadia High School in Arcadia, California. She met Lindsey Buckingham while studying at San Jose State University in Northern California, where Nicks majored in Speech Communication. After performing and touring for a few years, Nicks and Buckingham were hired by Fleetwood Mac on January 1, 1975.

Nicks’ “Rhiannon” which appeared on the band’s 1975 album was well-received by the music press and live performances gained her a enigmatic reputation as one of indie’s most engaging and enchanting voices. She Her contribution to Rumours , one the highest-selling albums in history, was “Dreams”, which became the only number 1 Fleetwood Mac hit single on Billboard Hot 100 to date.

Nicks is widely credited as one of the few artists in the history of rock music to establish a solo career while remaining a member of a successful band.

Stevie Nicks has been nominated for eight Grammy Awards as a solo artist.

Stevie Nicks is known for her dark, mysterious persona. She married Kim Anderson in 1982. The couple divorced after eight years of marriage.