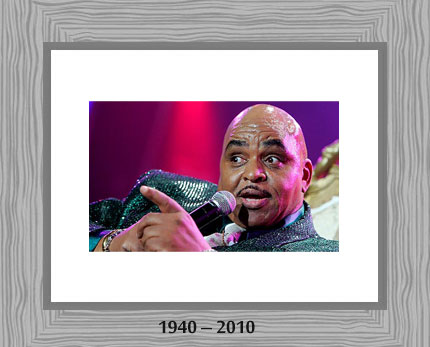 Solomon Burke was an American musician and recording artist. Although he had minimal chart success in a career spanning more than five decades, Burke was nonetheless one of the central figures in the development of soul music by introducing a country influence into rhythm and blues, along with his signature emotional phrasing, soulfulness and uptown arrangements. He has sold more than 17 million albums worldwide.

Born “James Solomon McDonald” on March 21, 1940 to a poor religious family in Philadelphia, Pennsylvania, Burke was the godson of Daddy Grace. He began preaching and performing gospel music at the Solomon’s Temple when he was only 7 years old.

Solomon Burke is often credited as one of the progenitors of soul music. In the early 1960s, he merged rhythm and blues with the gospel style that he had been performing in the church that his family established in Philadelphia. Burke also hosted a gospel radio program and started recording music in 1955. He released “Just Out of Reach”, a rhythm-and-blues inspired country ballad, in 1961. The song became his first national hit.

His style incorporated vocal techniques influenced by gospel music, with shouted recitation and rasping timbre. Burke signed a record contract with Atlantic Records in 1960, and under iconic record producer Bert Berns, became one of the first performers to be called a soul artist. He achieved success after recording a series of singles, including “Cry to me” (1962), If You Need Me” (1963), “Goodbye Baby (Baby Goodbye)” (1964), “Got to Get You off My Mind” (1965). His last Top 40 pop hit was “Tonight’s the Night” (1965).

Burke’s career significantly diminished in mid-1960s, but he continued to record and remained a popular performer on the blues festival and club circuit into the early 21st century. He died at Amsterdam Schiphol Airport while traveling to the Netherlands for a performance in October 2010. He was 70 years old.

Solomon Burke was inducted into the Rock and Roll Hall of Fame in 2001. His 2002 album Don’t Give Up on Me won the Grammy Award for Best Contemporary Blues Album in 2003. Burke was ranked at number 89 on Rolling Stone’s 2008 list of “100 Greatest Singers of All Time”.

Burke was married four times and fathered at least 14 children, including 9 daughters and 5 sons.