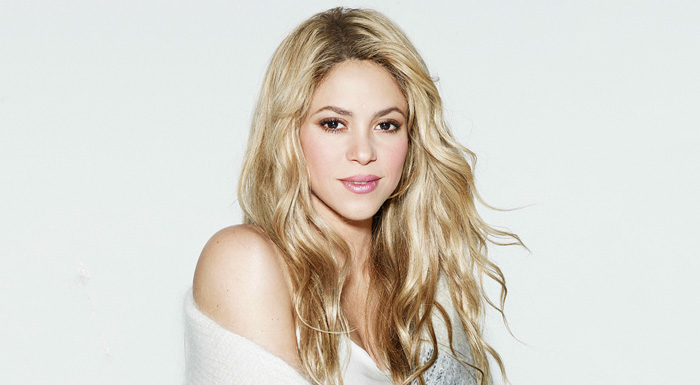 Shakira is a Columbian singer-songwriter, dancer and entrepreneur. Known for her aggressive rock-influenced vocals, passionate lyrics and sexy belly dance moves, she is one of the Latin’s pop biggest stars. One of the best-selling musicians of all time according to trade experts, Shakira has sold more than 125 million records across the world.

Born “Shakira Isabel Mebarak Ripoll” in Barranquilla, Colombia in February, 1977, her parents were of Lebanese, Spanish and Italian ancestry. Shakira wrote her first poem when she was only four and her first song, “Tus gafas oscuras”, at the age of eight.

Her next release, Dónde Están los Ladrones? (1998), was an even bigger global success and garnered Shakira two Latin Grammy Awards. Hits such as “Ciega, Sordomuda”, “Tú” and the Arabic-flavored “Ojos Así” paved the way for her explosion on the American music market.

After hiring Emilio Estefan as her manager and producer, Shakira dyed her hair blond to enhance her sex appeal. She relocated to Miami and recorded her first English-language album, “Laundry Service”, in 2001. The album was a huge international success, entering the American pop charts at number three, and selling over 200,000 copies in the first week. The multi-platinum selling album spawned the hip-shaking “Whenever, Wherever,” and the soulful “Underneath Your Clothes.”

After completing an extensive tour of Laundry Service, Shakira spent the next few years writing material for two albums simultaneously. The Spanish-language Fijación Oral, Vol. 1 brought her a second Grammy Award for Best Latin Rock or Alternative Album, and the English-language Oral Fixation, Vol. 2, featuring her colossally famous collaboration with Wyclef Jean, “Hips Don’t Lie”, made it to the top of the Billboard Hot 100 chart, and turned out to be one of the most played songs in pop-radio history.

Shakira started dating Argentinian lawyer Antonio de la Rúa in 2000. The couple broke up in 2011 amid legal dispute of $250 million. In 2013, De la Rúa filed a lawsuit in California asking for $100 million. Shakira is currently in a relationship with the Spanish football star Gerard Piqué. They have two sons, Milan Piqué i Mebarak and Sasha Piqué i Mebarak.

Shakira is a noted philanthropist who played various benefit concerts and generously donated the proceeds of his shows to UNICEF and other non-profit organizations. She founded the Colombian charity Pies Descalzos Foundation in 1997.