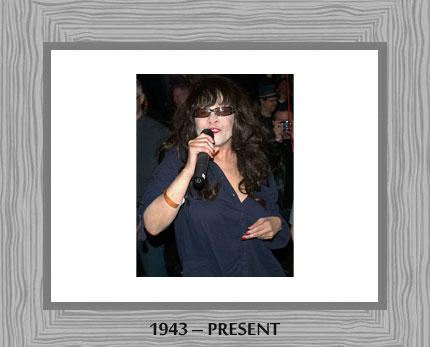 Ronnie Spector is an American singer and dancer, best known as the lead vocalist of the hugely popular 1960s girl group, the Ronettes. Known for her powerful and unique vocals and her turbulent personal life, she is also known as the original “bad girl of rock and roll”.

Born “Veronica Yvette Bennett” in New York City in 1943, her father was an Irish immigrant while her mother had Cherokee and African-American roots. Ronnie, her sister Estelle, and her cousin Nedra started singing at an early age.

After recording a few singles on Colpix Records without success, the Ronettes’ explosive rise in popularity happened in 1963 – after they were signed by Phil Spector – with their breakout hit, “Be My Baby”. The group, fronted by Ronnie Spector, saw favorable press reviews and steady chart success after scoring a series of chart-topping singles such as “Baby, I Love You”, “The Best Part of Breaking’ Up”, “Do I Love You?”, and “Walking in the Rain”. They were at the forefront of the 1960s girl group trend.

Ronnie’s and the other Ronettes’ career was in a state of decline in 1965, as Phil declined to produce new music for the group. The Ronettes were briefly reformed with the addition of two new members in the early to mid-1970s, but the results were hardly encouraging.

In her later years, Ronnie also collaborated with other notable artists such as Southside Johnny and Eddie Money. Her 1999 EP album She Talks to Rainbows garnered highly favorable reviews, but failed to chart completely.

Ronnie Spector married legendary record producer Phil Spector in 1967. They adopted three children: Donté, Luis and Gary Phillip. The couple divorced due to irreconcilable differences in 1974. She married her second husband, Jonathan Greenfield, in 1982. They have two sons, Austin Drew and Jason Charles.