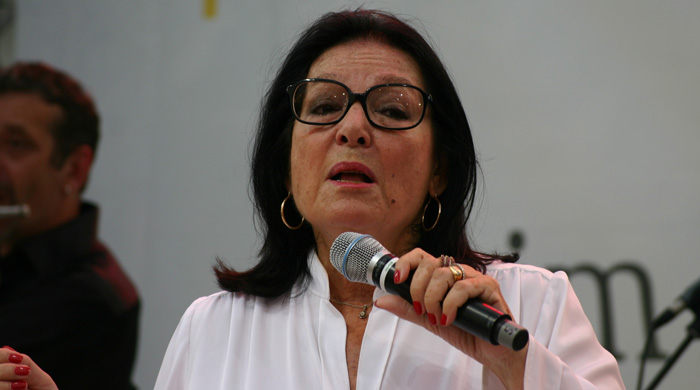 The best-selling Greek vocal artist of all time, Nana Mouskouri has sold more than 200 million records worldwide. Known for a unique, angelic soprano voice, she has recorded songs in a number of languages and worked across diverse genres such as jazz, pop, folk and world music. Mouskouri is frequently cited as the best-selling and most internationally acclaimed vocal artist to ever come from Greece.

Born “Ioánna Moúschouri” October 13, 1934 in Chania, Crete, both her parents worked in a local cinema. Her family relocated to Athens when Mouskouri was only three years old. She started singing lessons at age twelve. She studied classical music at the Athens Music Conservatoire and began her early career singing with a local jazz group in nightclubs.

Nana Mouskouri recorded her first song, “Fascination”, in both Greek and English in 1957. She met noted Greek composer Manos Hadjidakis while performing at the Zaki Club in 1958. Mouskouri debuted in the late 1950s and achieved worldwide success with a string of songs she recorded for Hataidakis.

In a few years, she became an international celebrity with releasing hits such as “White Roses from Athens” and “Only Love” in several languages, including Japanese, Greek, French and English. According to industry experts, Mouskouri has sold more than 230 million records in 15 different languages and recorded about 450 albums, half of which became gold and platinum.

This makes Mouskouri one of the most famous singers in the history of recorded music. Some music historians have even described her as the biggest-selling female artist of all time.

Nana Mouskouri was honored with an honorary degree by McGill University in 2013.

Nana Mouskouri has been married twice. She married guitarist George Petsilas, with whom she had two children, namely Nicolas and Hélène. The couple divorced in 1975. She married her second husband, André Chapelle, in 2003.