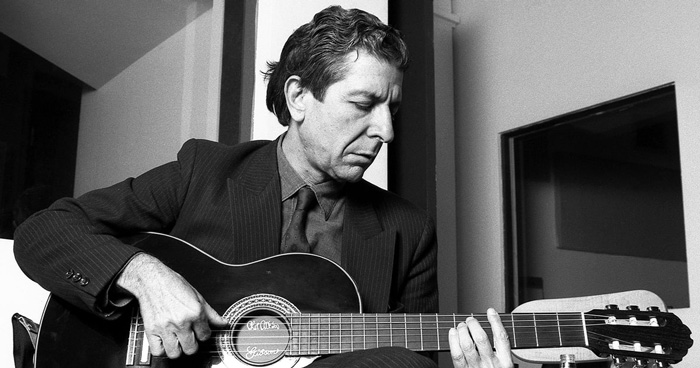 Leonard Cohen is quite simply one of the greatest and most original minds and lyricists in the history of music. The Canadian singer-songwriter and musician was also a prolific poet and occasional writer of fiction. Cohen’s work has explored themes relating to politics, religion, sex, overindulgence and human relations. Known for his rich baritone vocals, outstanding versatility and reverential mystique, he often appeared as an enigmatic figure for both his contemporaries and later musicians.

Born “Leonard Norman Cohen” into a middle-class Jewish family in Westmount, Quebec in 1934, he attended Roslyn Elementary School and went on to Westmount High School, where he studied music and poetry. Cohen learned to play the guitar and formed his first band in his early teens. After completing his undergraduate degree, Cohen wrote poetry and fiction throughout much of the 1960s.

Leonard Cohen started writing folk-rock and pop songs and made his first breakthrough musical performance at the Newport Folk Festival in 1967. He also appeared on the CBS television program Camera Three and received widespread critical acclaim for his original songs made popular by other singers such as Judy Collins and Noel Harrison.

Cohen released his debut album, The Songs of Leonard Cohen in 1966. The album featured “Suzanne”, which is one of the most-covered songs in Cohen’s catalog, and reached number 13 in UK. It also included songs such as “So Long, Marianne”, “Hey, That’s No Way to Say Goodbye”, and “Master Song”. His second studio album, Songs from a Room (1969), reached number 2 on the UK charts and featured songs such as “The Partisan” and “Bird on a Wire”.

Two years later, Cohen released Songs of Love and Hate (1971), which became his most commercially successful album in international markets such as the UK and Australia. He recorded three other albums before the end of the 1970s.

In 1984, Cohen released the synthesizer-heavy Various Positions. The album spawned, “Hallelujah”, one of Cohen’s best-known and most covered songs to date, which has more than 300 known cover versions. From the late 1980s to 2012, he produced several albums, including I’m Your Man (1988), The Future (1992), Ten New Songs (2001) and Dear Heather (2004). Cohen’s twelfth studio album, Old Ideas (2012), became his most commercially successful record in the United States, peaking at number 3 on the Billboard 200.