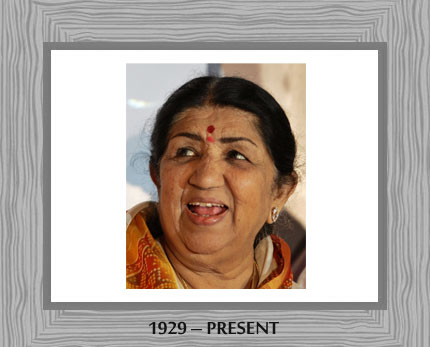 Lata Mangeshkar is widely regarded as the greatest and most influential female singer ever in India. She has recorded songs for more than a thousand movies and was even noted by the Guinness Book of World Records as the world’s most recorded singer since her 1947 debut. Lata is often nicknamed the “Nightingale of India”.

She was born in Sikh Mohalla at Indore on 28th September, 1929 to Marathi-speaking parents Deenanath Mangeshkar and Shudamati. Lata had three sisters (Asha Bhosle, Usha Mangeshkar and Meena Mangeshkar) and one brother (Hridaynath Mangeshkar). Her father was a talented classical singer and stage actor from Mangeshi in Goa who was trained in the Punjabi school of Baba Mushelkar. He also founded a small drama company that soon gained popularity in nearly every town of Maharashtra state.

Lata’s poor father could not afford fancy schooling but he gave her extensive and thorough musical training which brought her tremendous success and international fame in years to come.

Alam-Ara was the first-ever talkie in India which was released in 1934. It also marked the end of massive popularity of stage dramas. Lata Mangeshkar’s family moved to Sangli, an important business city of Maharashtra, as this forced many cinema companies to close and others to restructure. Her father was a heart patient who died in 1942, when she was only 12 years old. Hridayanath, her only brother, also severely suffered from tuberculosis around the same time.

Lata made her debut as an actress in a Marathi movie named Pahili Mangalagaur (1942) by Vinayak Rao. She sang her first Hindi song in 1943 in Gajabhau. Rao was so impressed by Lata’s voiced that he signed her as a staff artiste. His company moved to Bombay in 1945, but he died two years later in 1947. Lata became jobless again. She struggled for months trying to find a source of income.

She went to the studios of Bombay Talkies at Malad, a small suburb up North, where she was signed by Naushad, a renowned music composer of the time. She recorded for Andaaz (1949), a film directed by Mehboob Khan which eventually became a a box office blockbuster. After that, Husnlal Bhagatram, another noted film composer, hired her for Badi Bahen (1949). Lata became a household name when Barsaat – a 1949 film by Raj Kapoor – and Majboor – a 1948 film composed by Master Ghulam Haidar – were released. She has sung for numerous iconic film soundtracks and recorded duets with Mohammed Rafi, Kishore Kumar, Mukesh, Manna Dey and Mahendra Kapoor.

Lata has even composed a few songs for films, under the pseudonym “Anandghan”.

Lata Mangeshkar has won numerous awards and accolades in a career span of seven decades. She is the second singer to have ever been awarded the Bharat Ratna, India’s highest civilian award.

Lata Mangeshkar was the most famous singer of her time, but she never married. She is an avid cricket fan and a keen collector of perfumes.