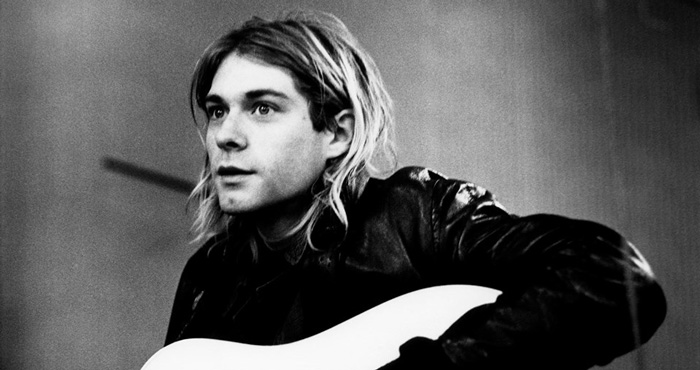 Kurt Cobain was an American singer-songwriter, musician, and visual artist who was the lead vocalist, guitarist, and primary songwriter of the alternative rock trio Nirvana. One of the most influential rock songwriters of the 1990s, his songwriting technique combined punk rock sound with melodic riffs and his anguished lyrics explored socially relevant themes such as the importance of social equality and freedom.

Born “Kurt Donald Cobain” in Aberdeen, Washington in 1967, his father was an automotive mechanic and his mother a waitress. Cobain belonged to a family with a rich musical background. His uncle was a guitarist who had played in several local bands and his grandfather was a tenor. He demonstrated artistic talents early and would masterfully sketch his favorite cartoon characters at a very young age. He started singing, playing the piano and wrote his first song at the age of four. When his parents divorced, Cobain was only nine. The divorce had a profound effect on his life. His personality changed dramatically and he started to rebel against everything.

Kobain relocated to Aberdeen prior to his graduation. He dropped out of high school and was thrown away from his mother’s home. After spending several years in homelessness, Kobain developed a strong passion for rock music and started dating Tobi Vail of Bikini Kill. The relationship would inspire several songs, “Aneurysm” and “Smells Like Teen Spirit”.

Kurt Cobain and Krist Novoselic, whom he had met while attending Aberdeen High, formed Nirvana in 1986. After unsuccessfully trying out a number of drummers, the band finally recruited Dave Grohl in 1980. Cobain’s angry, rebellious poetry, his versatile vocals and innovative lead guitar work helped give a new direction to the rock music as well as the fashion world. His honest, angst-ridden lyrics expressed a deeply personal feeling of despair and made a strong impression on the minds of young adults struggling with their own frustrations and alienation.

Combining the fury of punk rock and lyrics reflecting a sense of disillusionment and social concern, Nirvana popularized a sub-genre of alternative rock that became known as grunge. The trio’s debut album, Bleach (1989), was followed two years later by Nevermind (1991), featuring the game-changing hit single “Smells Like Teen Spirit”, which became an official anthem for grunge followers.

Cobain was known for his raging stage persona and his self-destructive behavior and heroin abuse. His much-publicized suicide came in 1992 when he slipped into a drug-and-alcohol-induced coma for 20 hours, and while the incident was initially reported as an accident, a suicide note was found at the scene. He was only 27 years old.

Cobain was posthumously inducted into the Rock and Roll Hall of Fame in 2014 as a member of Nirvana. He is ranked at no. 45 on Rolling Stone’s list of “100 Greatest Singers”.

Kurt Cobain’s personal life was marked by tragedy and controversy. He married Courtney Love on Waikiki Beach in Hawaii in February 1992. Their only daughter, Frances Bean Cobain, was born in August 1992. Cobain’s heroin addiction eventually led to his death at a young age of 27 in 1994.