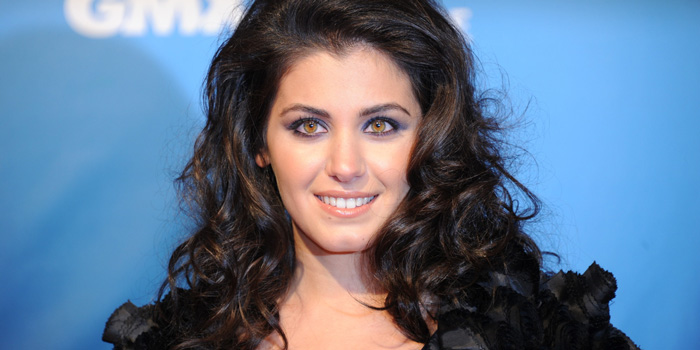 Katie Melua is a Georgian-British singer-songwriter and musician. One of the most prominent female recording artists in the United Kingdom, she has an estimated fortune of £18 million according to the Sunday Times Rich List 2008. Melua’s tasteful blend of jazz vocals with pop-style instrumentation received much critical acclaim in the music press. She has sold more than 10 million albums worldwide.

Born “Ketevan Melua” in Kutaisi, Georgian SSR in 1984, her family relocated to Britain in 1992 when her father, a surgeon, accepted a job in Belfast. They later moved to Surrey in 1997. As a student at the Brit School for Performing Arts, she was discovered by renowned producer Mike Batt.

Katie Melua is one of the most talented singers to ever emerge from Georgia. The folk-blues-jazzy singer-songwriter cites Ella Fitzgerald, Bob Dylan, Joni Mitchell and Freddie Mercury as her musical influences. She released her debut album, Call Off The Search, in 2003, featuring songs written by herself, Batt, John Mayall and Randy Newman. The album sold more than 1.7 million copies in the UK, making Melua the country’s best-selling female artist two years running, and three million abroad.

Her debut single, “The Closest Thing to Crazy”, became a top-ten hit in the UK. Melua’s next release, Piece By Piece (2005), was more experimental but sold as many copies. In 2005, she acquired British citizenship.

Melua’s next albums, Pictures (2007), The House (2010), Secret Symphony (2012) and Ketevan (2013), featured collaborations with various prominent international artists and were all commercial successes.

Katie Melua has won several awards and accolades, among them two ECHO Awards, a Goldene Kamera, and a World Music Award. Her debut album Call Off the Search is the 87th best-selling British album in history.

Katie Melua married motorbike racer James Toseland in 2012. She is a prominent philanthropist who has participated in a number of benefit concerts.