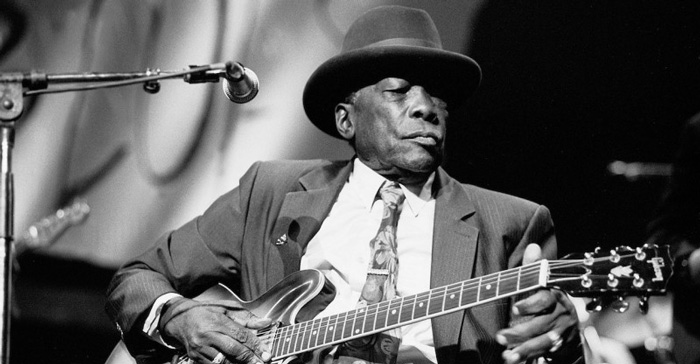 John Lee Hooker was an American singer-songwriter and musician who is frequently described as the one greatest blues guitarists in history. One of the most authentic practitioners of Mississippi Delta blues, his distinctive baritone explored themes such as depression, poverty, alcohol and promiscuity. Hooker’s primitive but powerfully timeless songs created a huge impact on rhythm and blues and rock ‘n’ roll.

Born in Coahoma County, Mississippi into a poor religious in 1917, his father was a sharecropper and Baptist preacher. Hooker, the youngest of the eleven children, was home-schooled in a strict environment. When his parents divorced in 1921, his mother married renowned Louisiana bluesman William Moore, who taught him guitar and got him started in the music world. Hooker ran away from home and relocated to Memphis, Tennessee when he was 14. He started working in factories and would occasionally perform at house parties and local nightclubs.

John Lee Hooker moved to Detroit, Michigan in 1943. It was here where he would earn a reputation as one of the most prominent blues musicians of his time. His early recordings – such as “Boogie Chilien”, “Crawling King Snake”, and “Weeping Willow (Boogie)” – exuded aggressive raw energy in fast boogies and startlingly intense, slow blues. His blues songs merged the traditional blues sound with jump and jazz rhythms. His strong, plaintiff vocals were unrivaled in their dark tonality.

A minimal yet powerful electric guitarist, Hooker played simple harmonies, pentatonic scales, and one-chord harmonic arrangements. He toured extensively from the 1950s and also acted in several motion pictures, such as The Blues Brothers (1980) and The Color Purple (1985). A few of his later hits included “Dimples” (1956) and “Boom Boom” (1962).

Hooker’s brilliant body of work, often considered to be an early precursor to rock ‘n’ roll music, influenced various artists such as Buddy Guy, the Rolling Stones, ZZ Top, and the Animals. Among the over hundred albums he released are The Healer (1989), Don’t Look Back (1997), and The Best of Friends (1998).

John Lee Hooker won numerous awards and accolades in his career, including three Grammys, the Grammy Lifetime Achievement Award, and a star on the Hollywood Walk of Fame. He was inducted into the Blues Hall of Fame in 1980, and into the Rock and Roll Hall of Fame in 1991.