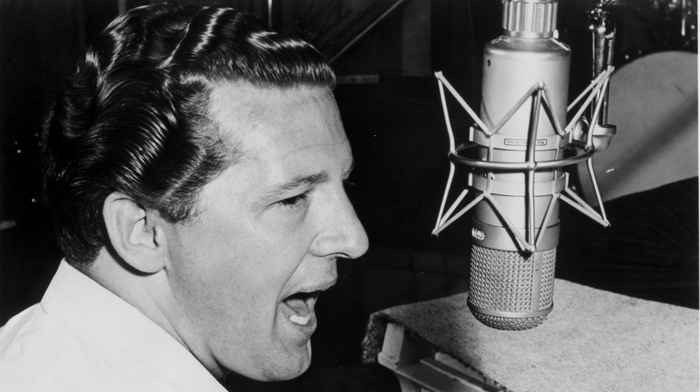 American singer-songwriter and pianist Jerry Lee Lewis was one of the most original and iconic figures in the 1950s rock ‘n’ roll scene. Often referred to as “The Killer”, he was a dynamic, piano-thumping, wild and egocentric showman who possessed a lascivious vocal style. Lewis’s career abruptly declined after he married his 13-year-old cousin when he was 22.

Born into a poor but music-loving family in Ferriday, Louisiana in 1935, Lewis showed promise in music from a very early age. His parents mortgaged their farm to buy him his first piano. Lewis honed his skills as a singer and pianist by performing with his cousins, Mickey Gilley and Jimmy Swaggart, in his teenage years. He started his early career singing in local nightclubs and dinner theaters.

Lewis cites Moon Mullican, Jimmie Rodgers and Hank Williams as some of his primary musical influences.

After relocating to Memphis in 1956, Jerry Lee Jewis secured a recording contract with Sun Records after singing Ray Price’s “Crazy Arms” and his own song “End of the Road”. His early musical style incorporated honky tonk, rockabilly, rhythm and blues, and folk influences, he had his first major breakthrough in 1957 with a blues-inspired, boogie-heavy rendition of Big Maybelle’s “Whole Lotta Shakin’ Goin’ On”.

Known for his electrifying stage performances and outstanding improvisational skills, Lewis became an instant sensation, both as a singer and pianist. He followed his success soon after with “Great Balls of Fire” and “Breathless”. Around this period, Lewis was involved in a number of controversies, particularly his alleged bigamy and his infamous marriage with his 13-year-old cousin, Myra Gale Brown.

After being banned from major radio stations, television channels and performing venues, Lewis signed with Smash in 1963. After releasing a few records reminiscing his high-voltage live act and the early rock ‘n’ roll nostalgia, he dug deeply into a country-inspired sound and released singles such as “What’s Made Milwaukee Famous (Has Made a Loser Out of Me)”, “To Make Love Sweeter for You”, “There Must Be More to Love Than This”, “Would You Take Another Chance on Me”, “Chantilly Lace”, and “Middle Age Crazy”. Lewis switched to Elektra in the late 1970s, and later moved on to MCA, Sire, and Warner Bros. In 2006, his 39th studio album Last Man Standing became his best-selling record with more than a million copies sold worldwide.

The personal life of Jerry Lee Lewis has been the subject of extensive media attention. His 1957 marriage to his 13-year-old cousin aroused much controversy and his career was almost ruined. Lewis has been married seven times and has four children.