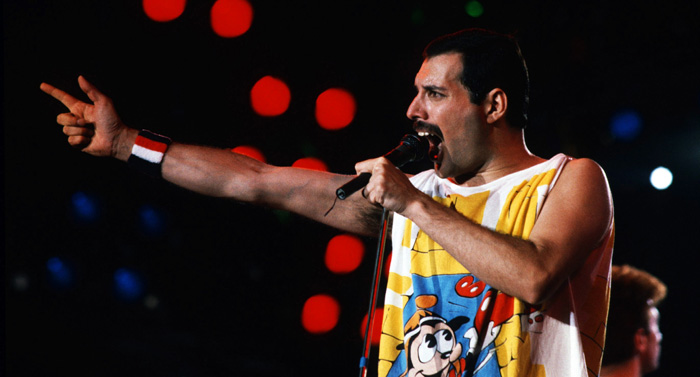 One of the most powerful and instantly recognizable voices in any genre, British singer-songwriter and musician Freddie Mercury, with his unmistakably flamboyant stage persona, was perhaps the most celebrated showmen of the rock era. He was the lead vocalist and primary songwriter of the rock band Queen. Mercury also led a successful solo career and collaborated with other artists as a producer and guest musician.

Born “Farrokh Bulsara” on the small island of Zanzibar, Tanzania, his father was a cashier at the British Colonial Office. He was sent to an English boarding school where his friends called him “Freddie”. Mercury took a passionate interest in arts and music from the very beginning. He received formal piano training up to the age of 9. Mercury actively took part in school musicals and formed his first band, the Hectics, at the age of 12.

When his family relocated to England due to the 1964 Zanzibar Revolution, Mercury joined various bands and eventually settled as the lead singer of Smile, a rock group featuring guitarist Brian May and drummer Roger Taylor. Despite objections from the other band members, he renamed the band “Queen” and changed his own surname, Bulsara, to Mercury.

After recruiting John Deacon on bass, the band signed a recording contract with Trident Productions in 1972. Queen rose to worldwide prominence when “Killer Queen”, a guitar-driven song originally on their third album Sheer Heart Attack, was released as a single, reaching number 2 on the UK Singles Chart. Their 1975 song “Bohemian Rhapsody” was the most expensive single ever made. It stayed at the top of the UK Singles Chart for nine weeks and sold more than a million copies within a few months. The song made the band a household name. Queen would play sold-out concerts in stadiums, opera houses, and arenas across the globe.

Queen continued their worldwide domination of the music charts and performed lavish stage acts until 1982, when Mercury announced that the band would be on hiatus for at least a year. His solo career could never match the tremendous success he enjoyed with Queen. In 1985, Queen made a legendary appearance at Live Aid.

In 1986, various press reports circulated that Mercury had his blood tested for HIV. He made his final public appearance on stage when he joined his bandmates to collect the Brit Award for Outstanding Contribution to Music in 1990. When became more ill in his final years and rarely made a public appearance.

Mercury died aged 45 in his sleep of bronchial pneumonia resulting from AIDS in November 1991. His funeral service was conducted by a Zoroastrian priest and his body was cremated at Kensal Green Cemetery, West London.

Freddie Mercury won several awards and accolades in his career. A few of them include an Ivor Novello Award, a Golden Lion Award, among others. In 1992, he was posthumously awarded the Brit Award for Outstanding Contribution to British Music. As a member of Queen, Mercury was inducted into the Rock and Roll Hall of Fame, the Songwriters Hall of Fame, and the UK Music Hall of Fame.

While Freddie Mercury may have led a controversial personal life, no one can question his immense contribution to rock music. His sexual orientation and ethnicity stimulated much controversy in the press. Intensely tight-lipped about his private life, Mercury never revealed how or when he contracted AIDS. Mercury died of bronchial pneumonia at the age of 45 at his home in Kensington, England.