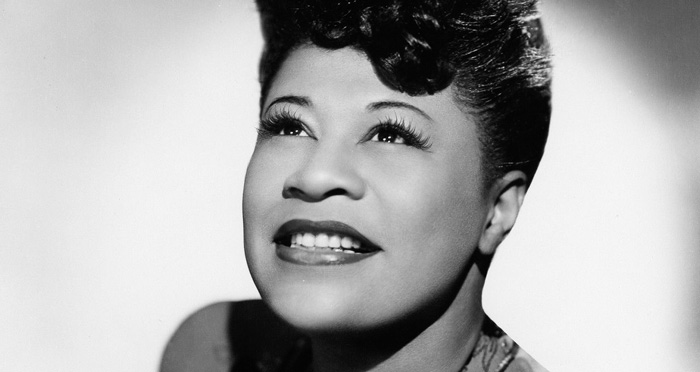 There is almost a universal consensus that Ella Fitzgerald was the greatest jazz singer of the century. Also known as the “First Lady of Song” and the “Queen of Jazz”, she was known for her flawless phrasing and diction, amazingly wide and beautiful vocal range, and great improvisational ability. Fitzgerald recorded 70 albums and sold more than 40 million worldwide in a career spanning about six decades.

Born in April 1917 in Newport News, Virginia, she spent her childhood in a single room in Westchester County, New York. She began her formal education at age 6 and attended Benjamin Franklin Junior High School. Fitzgerald was passionate about dance from an early age. She was a huge fan of Earl “Snakehips” Tucker. Her mother died from a heart attack when Fitzgerald was only 15.

After running away from the orphanage, Ella Fitzgerald won an Apollo Theater amateur contest in 1934, after singing a rendition of The Boswell Sisters’ hit “The Object Of My Affection”. She was discovered by renowned trumpeter and saxophonist Benny Carter who was in the audience. Cater introduced Fitzgerald to drummer and bandleader Chick Webb.

She was recruited in Webb’s orchestra in 1935 and performed regularly at Harlem’s Savoy Ballroom. She rose to prominence in 1938 with her unique, swinging rendition of the nursery rhyme, “A-Tisket, A-Tasket”. When Webb died in 1939, her bandmate Bill Beason became the drummer and the band continued under Ella Fitzgerald’s moniker.

Fitzgerald embarked on a solo career with Decca Records in 1942, and scored massive hits such as “It’s Only A Paper Moon”, “Into Each Life Some Rain Must Fall”, and “How High The Moon”. She was noted as the most talented improvising bebop and scat vocalist of her generation who was adored and embraced by both pop and jazz audiences.

When Fitzgerald was dropped by Decca in 1956, she decided to sign with her manager Norman Granz’s new label, Verve Records. Her career remained steady into the rock era and she scored several hits on the pop charts such as the Grammy-winning “Mack the Knife” and a cover of Smokey Robinson’s “Get Ready”. Fitzgerald suffered various health problems by the late 1960s, and her masterful voice was also affected. She was hospitalized in 1986 for congestive heart failure and severe diabetes.

Fitzgerald died aged 79 at her home in Beverly Hills, California in June 1996.

Ella Fitzgerald won numerous accolades and accolades in her lifetime, and has been posthumously awarded many more, including thirteen Grammy Awards, the Grammy Lifetime Achievement Award, the Kennedy Center for the Performing Arts Medal of Honor Award, National Medal of Art, and Presidential Medal of Freedom.

Ella Fitzgerald was married twice, and had one adopted son. She was also a keen philanthropist who supported many charities and non-profit organizations. She founded the Ella Fitzgerald Charitable Foundation in 1993.