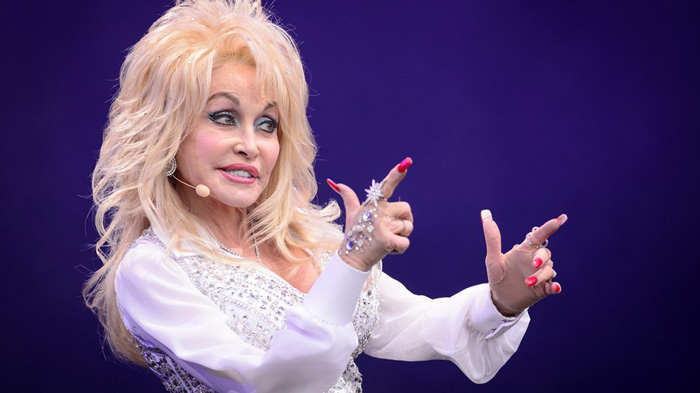 Dolly Parton is an American singer-songwriter, musician, actress and businesswoman who is credited with bridging the gap between country and pop music styles during the mid-’70s. Arguably the most popular country superstars, she became one of the most notable icons in popular culture with her impressive musical skills, over-the-top media image, and astute business skills. One of the most honored female singers in history, Parton has sold more than 100 million records worldwide.

Born “Dolly Rebecca Parton” in 1946 in Sevier County, Tennessee, she grew up in a tobacco farm in the Smoky Mountains. Parton was one of twelve children living in a one-room cabin in Locust Ridge without electricity or indoor plumbing. She often wrote about her family’s poverty in her early songs. Parton’s grandfather was a preacher and gospel music played a big part in shaping her musical talent. She was making up songs before she could even read or write.

Dolly Parton received her first guitar at eight. By age eleven, she was already performing as a child, singing on local radio and television programs. She recorded her first song, “Puppy Love”, for the small label Gold Band Records when she was only 13. Parton rose to fame as a teenage singing star in 1967, having earned her first hit single “Dumb Blonde” and an appearance on Porter Wagoner’s popular television show.

Over the next few years, Porter and Parton recorded a string of top ten hits such as “The Last Thing on My Mind” and “Please Don’t Stop Loving Me”. An independent young woman, she soon sought artist freedom and performed her last duet concert with Wagoner in 1974. By 1976, Parton was probably the most prominent female country performer in the United States, having her own eponymous show and several Country Music Association awards. Her screen debut came in Colin Higgins’s Nine To Five (1980), which won her an Academy nomination for its title track.

An adept entrepreneur, Parton has banked on her larger-than-life persona and good looks into a $100 million media empire, Dolly Parton Enterprises. Her amusement parks, Dollywood and Dollywood’s Splash Country, attract thousands of visitors every month to Pigeon Forge, Tennessee. Parton continues to write and record music, to act, and to play concerts.

Dolly Parton has received several awards and accolades in her career, including 7 Grammy Awards, 3 American Music Awards, 7 Academy of Country Music, and 9 Country Music Association Awards. She was inducted into the Country Music Hall of Fame in 1999.

Dolly Parton is a cultural icon and one of the most enduring female performers in history. She is also a popular gay icon and actively campaigns for LGBT rights. The name of the first cloned sheep, “Dolly the sheep”, was influenced by Parton’s public image since it was cloned from cells of the mammary gland of its mother.

She married Carl Thomas Dean in 1966. The couple have no children of their own.