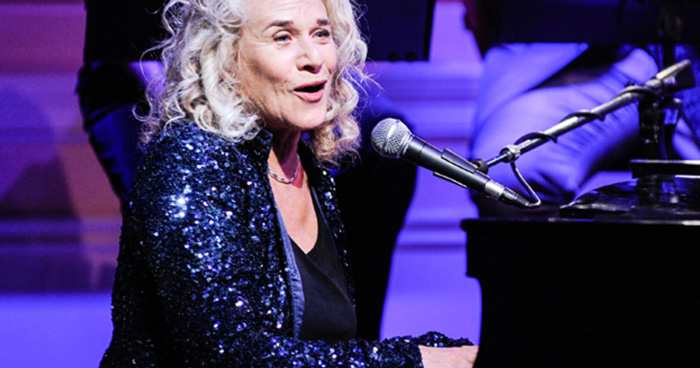 Carole King is an American singer-songwriter who is frequently cited as one of the most accomplished and talented composers in the history of pop music. Her work has been recorded by a wide range of artists, from the Beatles to Aretha Franklin. In a career spanning more than five decades, King sold an estimated 25 million units worldwide and broke a number of chart records.

Born “Carol Joan Klein” in Manhattan, New York City in 1942, her father was a firefighter and her mother was a teacher. She developed an early interest in music and started learning the piano at the tender age of four. King appeared on the popular variety show The Horn and Hardart Children’s Hour at age eight, singing 1950’s classic “If I Knew You Were Comin’ I’d’ve Baked a Cake”. She attended James Madison High School in Brooklyn, New York.

Carole King met Paul Simon while attending Queen’s College in 1958. During this period, she started writing songs professionally and met her future husband and collaborator, Garry Goffin. She wrote a number a singles in the late 1950s, but rose to prominence after writing “Will You Love Me Tomorrow”, together with Goffin, for the Shirelles in 1960.

She wrote more than 100 hits for other artists with her husband. A few of them include “Wasn’t Born To Follow”, “Don’t Bring Me Down”, and “I’m Into Something Good”. King released her own debut song, “It Might as Well Rain Until September”, in 1962. It became an international hit, peaking at number 3 on the UK Singles Chart.

After King and Goffin separated in 1967, she put together a short-lived band, and released her debut album, Writer, in 1970. Her second album, Tapestry (1971), garnered highly favorable reviews and went on to sell more than 15 million records worldwide. King continues to perform and record music, and has appeared in a few acting roles.