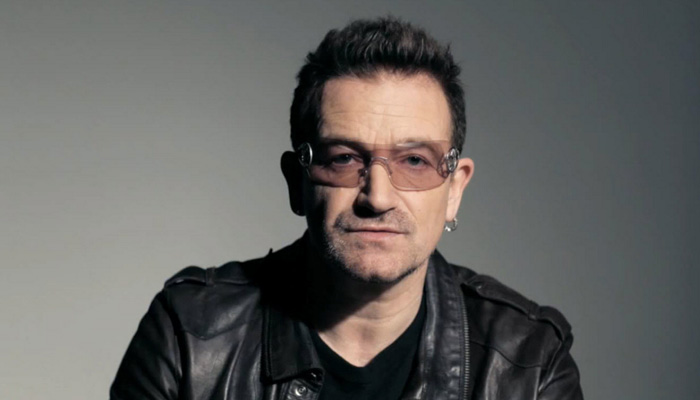 Bono is an Irish singer-songwriter, musician, businessman and activist best known as the frontman and primary songwriter of the rock band U2. Arguably one of the most popular icons in the history of rock music, he wrote socially and politically relevant lyrics and won high praise for his activism and philanthropy. Bono also collaborated and recorded with various artists from diverse genres.

Born “Paul David Hewson” in Dublin, Ireland in 1960, he attended the local primary Glasnevin National School. Bono was only 14 when his mother died of a cerebral aneurysm in 1974. He later switched to Mount Temple Comprehensive School where he met his future wife, Ali Hewson, and the future members of U2.

In 1976, Bono, Adam Calyton, The Edge (David Evans) and his brother Dik Evans replied to an advert on a bulletin board at Mount Temple looking for fellow students to form a rock band. The advert was posted by Larry Mullen Jr.

Initially playing covers of Rolling Stones and Beach Boys classics, U2 started writing their own material with Bono’s lyrics contributing to the rebellious and spiritual image of the band. U2’s sound and focus significantly changed as the band matured and the lyrics became inspired more by personal experiences and relationships.

During concerts, Bono is known for interacting with the audiences, sometimes even joining the crowd, and for pulling audience members onto the stage. Outside the band, Bono has collaborated and recorded with various renowned international artists such as Frank Sinatra, Luciano Pavarotti, Kylie Minogue and Jay-Z. He was granted an honorary knighthood by Queen Elizabeth II of the United Kingdom in 2007.

Bono has won various awards and accolades in his career, including 22 Grammy awards and a Golden Globe award. He was inducted into the Rock and Roll Hall of Fame in 2005 as a member of U2. Bono has also received several awards for his charity work.

Bono is one of the best-known philanthropists in the music industry. He is also a successful investor and is on the board of the Elevation Partners, a private-equity firm which owns stakes in the Forbes Media group and Facebook. He has an estimated net worth of $600 million.

Bono married Alison Hewson in 1982. The couple have four children.