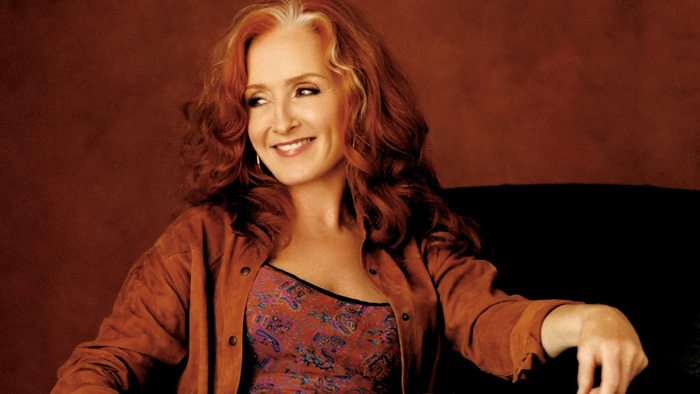 Bonnie Raitt is an American blues singer-songwriter and musician. She received widespread critical and commercial success after releasing a number of roots-influenced albums infused with blues, rock, folk and country during the 1970s. Her slide guitar skills have earned her numerous awards and honors.

Born Bonnie Lynn Raitt on November 8, 1949 in Burbank, California, she belongs to a renowned musical family. Her father, John Raitt, was a famous Broadway star. Bonnie started playing the guitar at the young age of eight. She became interested in the Mississippi blues of Fred McDowell and Muddy Waters while still a teenager. She dropped out of school to play the blues bar circuit.

Bonnie Raitt soon gained popularity due to her impressive slide and acoustic guitar skills, as evident on early recordings such as “Finest Lovin’ Man” or “Love Me Like a Man”. Her alluring, sultry voice attracted rave reviews and she went to score a notable hit with 1974’s Streetlights, which contained her signature ballad “Angel from Montgomery”. She released Sweet Forgiveness in 1977, which contained the single “Two Lives” and a cover version of Del Shannon’s “Runaway”.

Bonnie was one of the major attractions at the 1979 “No Nukes” benefit concert at Madison Square Garden in New York. Capitalizing on her blues roots and masterful guitar playing, she scored a number one album with the aptly titled Nick of Time in 1989. She swept the 1989 Grammy Awards, taking home four awards in total. Her 1991 album Luck of the Draw, was another smash hit. Bonnie’s Longing in Their Hearts, released in 1994, reasserted the fact that her popularity was not a trendy affair.

Her slide playing skills have often been compared to those of Duane Allman. Bonnie is widely considered as blues-rock’s only guitar goddess.

Bonnie Raitt married actor Michael O’Keefe in 1991. The couple filed for divorce in 1999. She is also well-known for her charitable and political work.