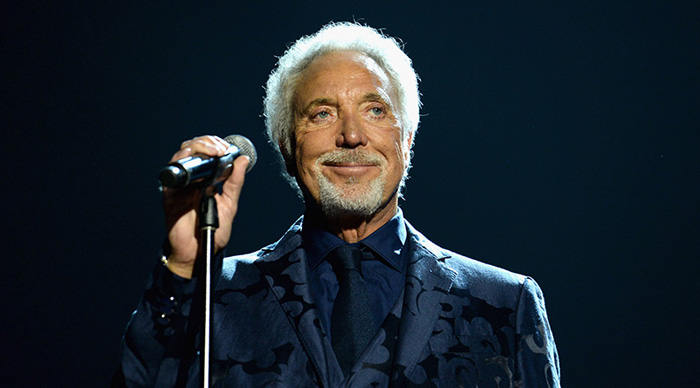 Tom Jones is a Welsh singer who is widely considered as one of the most iconic vocalists associated with the British Invasion. His full-throated baritone vocals and raw sexual appeal became part of his charismatic musical persona. he has sung nearly every form of popular music.

He possessed an astounding versatility, appearing in virtually every genre of popular music.

Born “Thomas Jones Woodward” December 7, 1949 in Pontypridd, Wales, Jones began singing at an early age. He had a wife and son by the age of 17.

Tom Jones adopted the stage name “Tommy Scott” and joined the Senators when he was 23 years old. He went solo the following year and started billing himself as “Tom Jones”. With the efforts of his friend and singer-turned-manager Gordon Mills, he signed a record deal with Decca Records in 1964.

Jones’ first hit came with 1965 single “It’s Not Unusual” and his flamboyance and strong sex appeal soon made him a worldwide celebrity and the pre-eminent singer of his era. He recorded a number of his LPs the late 1960s, all of which were in the Top ten Charts in both Europe and the United States.

His enormous recording success drew packed halls and his confidence and energy as a singer and performer kept blossoming, resulting in several notable film and television appearances. As of 2014, Jones has sold more than 100 million albums worldwide.

Tom Jones received a knighthood from Queen Elizabeth II for his extraordinary services to music in 2006. He won the Grammy Award for Best New Artist in 1966, an MTV Video Music Award in 1989 and two Brit Awards.

Jones married his high school girlfriend, Melinda Trenchard, in 1957. The couple has stayed married since then despite his many well-publicized infidelities. They have one son, Mark Woodward.