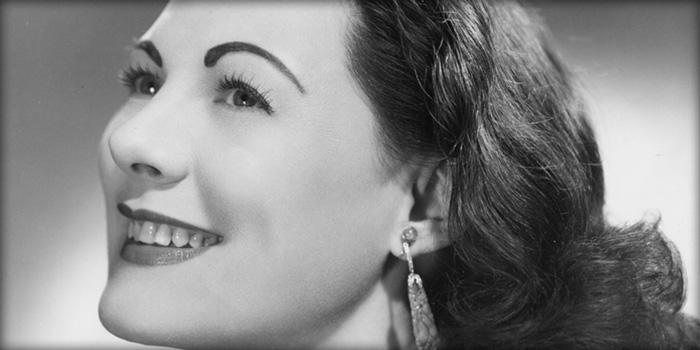 Renata Tebaldi was quite simply one of the most celebrated and influential opera singers of the 20th century. A very powerful spinto soprano of great international fame, she possessed “the voice of an angel”. Tebaldi has been the inspiration for countless sopranos worldwide.

Born “Renata Ersilia Clotilde Tebaldi” in Pesaro, Italy in 1922, her father was a cellist while her mother was an aspiring singer and nurse. Her parents divorced before her birth and Tebaldi was raised by her mother. She started taking piano and voice lessons under Italo Brancucci and Ettore Campogalliani at the conservatory of Parma at the age of 13, later formally joining the conservatory at the age of 17.

The stage debut of Renata Tebaldi came as Elena in Boito’s Mefistofele in Rovigo in 1944. Her breakthrough performance was in 1946 as Desdemona when she sang alongside Francesco Merli as Otello in Trieste. Renowned Italian conductor Arturo Toscanini famously called her “voce d’angelo” (angel voice). Tebaldi’s La Scala debut was the first major theatrical performance after World War II. She subsequently took the important roles of Margherita and Elena in Mefistofele, Elsa in Lohengrin and Eva in Die Meistersinger by the end of 1947.

Tebaldi’s memorable La Scala performance alongside Mario del Monaco and Fedora Barbieri in 1950 launched her international career. It conducted by the legendary Antonino Votto. Her much publicized rivalry with Maria Callas, another star performer at at La Scala, gained much press attention and many followers.

Tebaldi made her American debut in 1950 at the San Francisco Opera and her Metropolitan Opera debut five years later in 1955. She eventually became a huge attraction at the Met and her reputation rose so high at one time, that the press dubbed her the “Miss Sold Out”. By the end of her musical career in 1976, Tebaldi had sung in 1,262 performances, 1,048 complete operas, and 214 concerts across the world.

Renata Tebaldi received many awards and accolades in her lifetime. In 1958, she was awarded the Grammy Award for Best Classical Performance. In 1996, she was awarded the Legion d’Honneur by the French government. Tebaldi was also honored with the Academy of San Luca Award by the Association of the Twelve Apostles.

Renata Tebaldi never married in her life. She was a devoted member of the church choir in Langhirano.