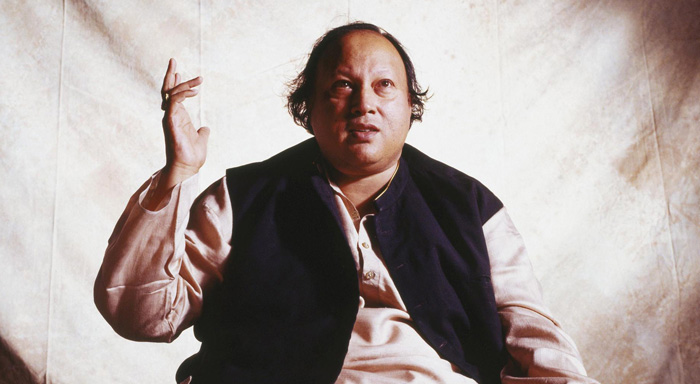 One of the greatest voices ever recorded, Pakistani Qawwali singer Nusrat Fateh Ali Khan possessed a beautiful voice and an extraordinarily wide range. Often referred to as “Shahenshah-e-Qawwali”, he was one of the progenitors of world music whose legendary performances often lasted for more than three hours. Khan attracted a wide global audience and became one of Real World’s top acts. He recorded more than 50 albums, which today are considered Qawwali classics.

Born in Faisalabad, Pakistan in 1948, Khan’s family had an unbroken tradition of Qawwali for over 600 years. His father, Fateh Ali Khan, was a renowned Qawwali singer, instrumentalist and musicologist who originally wanted his son to become a doctor. When Khan’s father died in 1964, he was 16 and still going to school. His musical training was completed by his uncles, Mubarak Ali Khan and Salamat Ali Khan. Khan made his first public performance after two years, singing with his uncles.

Khan, much like his forefathers, sang Qawwali in a very high range. Possessing an extraordinarily expressive voice, he had incredible melodic creativity and could sometimes perform at a high level of intensity for more than ten hours. By the early 1970s, he was hailed throughout the Indian Subcontinent as the most prominent Qawwal of his time. In 1985, he performed at a world music concert in the United Kingdom. Soon he would establish himself as a charismatic, enchanting vocal artist, regularly singing in major music festivals all over Europe to massive crowds.

In 1996, Khan recorded songs for a number of American film soundtracks. He also appeared on music television shows and performed songs that were specifically created to appeal to Western audiences. Although Qawwali purists thought he had exploited the Islamic heritage of the genre, Khan defended himself by saying that he had lost nothing to share his musical heritage with a wider audience. He influenced artists from all over the world, from Peter Gabriel to Jeff Buckley, and A. R. Rahman to Nadia Ali.

Khan died aged 48 of a sudden cardiac arrest at Cromwell Hospital, London in 1997. His funeral was attended by thousands of fans and public figures across all platforms.

Nusrat Fateh Ali Khan won numerous awards and accolades in his lifetime, and has been posthumously awarded many more. Some of them include the UNESCO Music Prize, Grand Prix des Amériques, and the President of Pakistan’s Award for Pride of Performance. In 2005, Khan was honored with the “Legends” award at the UK Asian Music Awards. Time magazine named him one of the greatest Asian artists and thinkers in their 2006 cover story titled “60 Years of Asian Heroes”.

Nusrat Fateh Ali Khan married his first cousin, Naheed, in 1979. They had one daughter, Nida.