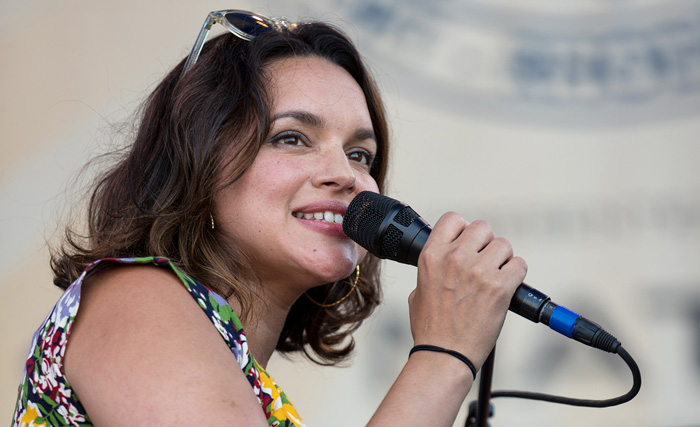 Norah Jones is an American singer-songwriter, musician, and occasional actress. Known for her sultry, melodic voice, she created a unique musical style incorporating the best elements of jazz, country, pop and easy listening. Acclaimed as the biggest new voice in jazz singing, Jones is the daughter of Indian sitar legend Ravi Shankar. Since 2001, she has had total sales of more than 50 million units worldwide and won many prestigious awards for her outstanding body of work.

Born “Geetali Shankar” in Brooklyn, New York in 1979, her parents never married and separated in 1986 when she was only six years old. Jones’ mother, Sue Jones, was a concert producer. While still in high school, she developed a passion for music and sang in the school choir. During this period, Jones took voice lessons and learned to play different musical instruments such as the alto saxophone and the piano. She attended the University of North Texas, where she earned a major in jazz piano.

Norah Jones relocated to New York City and signed a recording contract with Blue Note Records in 2001. The next year she released her critically-acclaimed debut solo album Come Away with Me. A fusion of jazz with country music and pop, the album sold more than 26 million copies worldwide and earned Jones five Grammy Awards, including the Album of the Year, Record of the Year, and Best New Artist.

Her second solo album, Feels Like Home (2004), also garnered highly favorable reviews and became the year’s best-selling album. The album sold more than 12 million copies worldwide and earned her another Grammy for “Sunrise”. Her subsequent releases, Not Too Late (2007), The Fall (2009) and Little Broken Hearts (2012), all went multi-platinum and spawned several hit singles. Norah was named the top jazz artist of the 2000–2009 decade by Billboard magazine.

In 2007, she launched her acting career with My Blueberry Nights, a drama film directed by Wong Kar Wai. Norah has since worked in a number of movies, documentaries and television shows.

Norah Jones started dating fellow musician Lee Alexander in 2000. The couple lived together until their breakup in 2007. In 2014, she gave birth to a son with an unidentified partner.