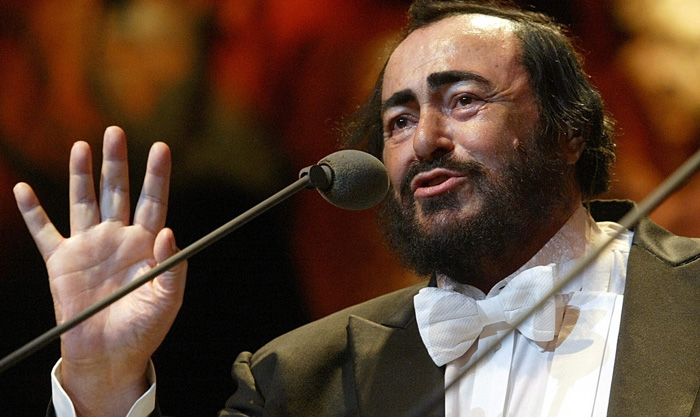 Italian operatic tenor Luciano Pavarotti was considered one of the greatest and most accomplished bel canto opera singers of the 20th century. One of the “Three Tenors” alongside Plácido Domingo and José Carreras, his voice was noted for its purity of tone and electrifying upper register. Pavarotti distinguished himself by successfully traversing into popular music. His concerts, recordings, and television appearances drew huge worldwide attention.

Pavarotti was born in 1935, in Modena, Italy, music was his birthright. His father was a baker and aspiring tenor, while his mother was a factory worker. He graduated from a local teaching institute in 1955 and taught junior school for nearly two years. Pavarotti also studied opera privately, mostly in Mantua.

Never known for his acting ability, Luciano Pavarotti will be remembered as the most famous and versatile lyric tenor of his generation. His beautiful voice was noted for its purity of tone when in the highest register. He had extraordinary control on every note in his range of over two octaves. Besides performing in opera houses, Pavarotti recorded extensively and attained massive commercial success through his televised opera performances and film appearances.

Shortly after winning the Concorso Internazionale, a musical competition in voice, he made his professional operatic debut in 1961 in Reggio Emilia, Italy, as Rodolfo in Giacomo Puccini’s La Boherne. He then performed in various prominent opera houses throughout Europe and Australia.

Pavarotti made his American debut at New York City’s Metropolitan Opera House in 1968. By 1971, he was already a major star in America. Some of his most famous operatic roles include the duke in Giuseppe Verdi’s Rigoletto, Tonio in Gaetano Donizetti’s La fille du regiment, Arturo in Vincenzo Bellini’s I puritani, and Radames in Verdi’s Aida.

Luciano Pavarotti won numerous awards and accolades in his lifetime, and has been posthumously awarded many more, including several Grammy, Emmy, Gramophone and World Music Awards. He was honored at Kennedy Center, knighted with the Commendatore Cross of the Royal Order, and made officer of the Legion of Honour.

Luciano Pavarotti was a noted philanthropist who played various benefit concerts and generously donated the proceeds of his shows to non-profit organizations such as the Red Cross.

Pavarotti married twice. His first marriage to Adua Veroni (in 1961) produced three daughters. He married his former personal assistant, Nicoletta Mantovani, in 2003. The couple had a daughter before they were married.