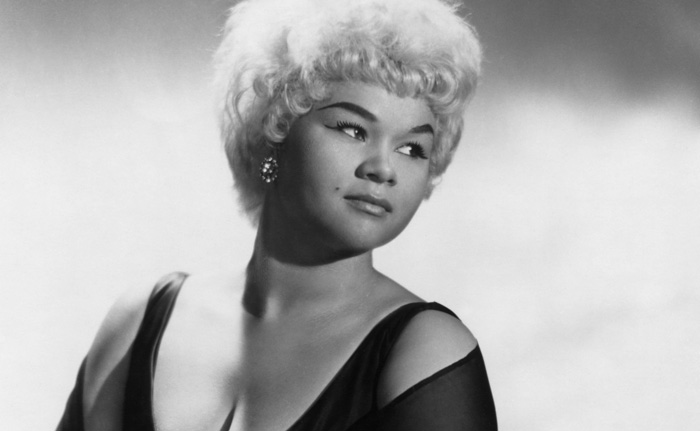 Etta James was an American singer-songwriter whose work incorporated a variety of musical styles, including blues, R&B, soul, rock and roll, jazz and gospel throughout a career that spanned six decades. One of the most celebrated R&B singers in history, James is credited with having bridged the divide between rhythm and blues and rock and roll music.

Born “Jamesetta Hawkins” in Los Angeles, California in January 1938, she developed an early interest in music and took her first professional vocal training at the age of five. Within a year, she was the star of the church choir; and by the time she was fourteen, James was already singing professionally with the Creolettes, a rhythm-and-blues band.

Discovered by musician Johnny Otis, Etta James recorded her first song “Roll with Me, Henry” in 1954. The song, a joking response to Hank Ballard’s “Work with Me, Annie”, was sexually suggestive enough to be banned by radio disc jockeys all over the country. James signed with Modern Records and recorded a series of hits throughout the late 1950s, including the 1955 hit “Good Rockin’ Daddy”. In 1960, she secured a recording contract with Chess Records, where she honed her singing talent and blossomed into a truly magnificent singer.

Classics such as 1960’s “All I Could Do Was Cry” (1960) demonstrated how James’s passionate yet voice could masterfully treat a ballad. Her much lighter, more pop-oriented songs like “Stop the Wedding” (1962) and “Pushover” (1963) also became huge hits. James’s drug problems significantly halted her career. Although she resumed recording sporadically in the 1960s and 1970s, James produced some of her best work during her healthy intervals in these decades. 1967 saw another series of hits singles by James, which she recorded at the famed Muscle Shoals Sound Studio. The chart-toppers included “Tell Mama” and a remake of Otis Redding’s “Security.”

After quitting her heroin addiction in the mid-1970s, James made a major comeback and started recording and touring steadily. The name of her 2001 album, Matriarch of the Blues, is reflective of her massive influence on the soul and blues genres.

James was hospitalized in January 2010 to treat an infection caused by MRSA. She was diagnosed with Alzheimer’s disease in 2008 and with leukemia in 2011. James died aged 73 of complications from leukemia at Riverside Community Hospital in Riverside, California. Her funeral was held in Gardena, California. Christina Aguilera and Stevie Wonder were in attendance to pay tribute to the legendary singer.

Etta James was noted for a turbulent personal life and her struggles with drug addictions and legal issues. She married Artis Mills in 1969. They had two sons, namely Donto and Sametto.