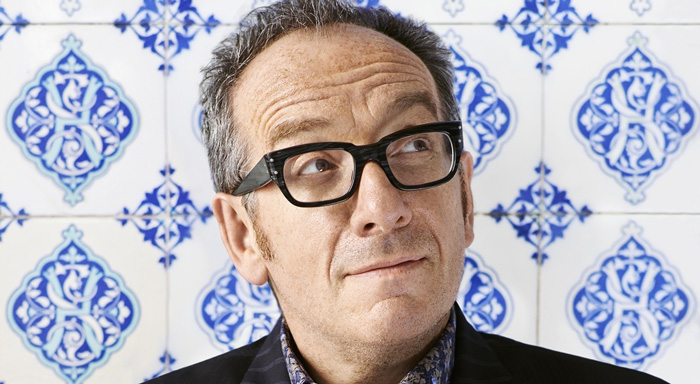 Elvis Costello is an English singer-songwriter, musician and record producer. Known for his intricate lyrical wordplay and a distinctive appearance with skinny tie and Buddy Holly horn-rimmed glasses, he made an enormous impact on the music scene in the seminal punk/ new wave movement of the mid-to-late 1970s. After the breakup of Costello and the Attractions in 1986, Costello maintained a successful solo career.

Born “Declan Patrick MacManus” in Paddington, London in 1954, he belonged to a musical family and his father, Ross MacManus, was also a musician and bandleader. Costello attended Archbishop Myers R.C. School in Twickenham and demonstrated extraordinary singing skills as a child. His first recording was for a television commercial for R. White’s Lemonade. His father wrote and sang lead on the song, while Costello contributed backing vocals. The commercial gained widespread recognition and was given a silver award at the 1974 International Advertising Festival.

Elvis Costello started his musical career as part of London’s pub rock scene in the early 1970s. He secured a recording contract with a small, independent British label Stiff Records and released his critically acclaimed debut album, My Aim Is True, in 1977. The album was a critical and commercial success and featured hit singles such as “Watching the Detectives”, “Alison”, and “(The Angels Wanna Wear My) Red Shoes”. That same year, Costello signed an American contract with Columbia Records.

After putting together the Attractions as his backing band, he followed this success with This Year’s Model (1978) and Armed Forces (1979). The latter featured his most successful single “Oliver’s Army”, which spent four weeks at number two in the UK Singles chart.

Costello and the Attractions released various albums and toured worldwide extensively, but broke up due to personal differences in 1986. Much of Costello’s output since has been as a solo artist. He has collaborated with a number of prominent musicians such as Paul McCartney, Burt Bacharach and Tony Bennett. Costello also carved out a sizable film career for himself, appearing in nearly two dozen movies.

Elvis Costello has won numerous awards and accolades in his career, including a Grammy Award, a Grammy Hall of Fame Award, a MTV Video Music Award, and three NME Awards. He was inducted into the Rock and Roll Hall of Fame in 2003.