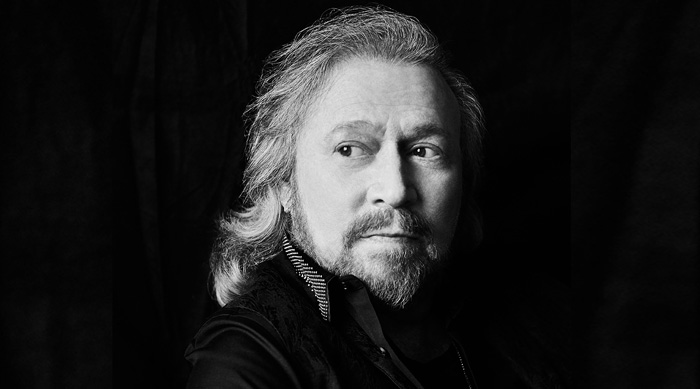 Barry Gibb is a British singer-songwriter and record producer best known for being one of the founders of the pop group Bee Gees, one of the most commercially successful musical acts in history. He wrote songs, sang, and played guitar with his twin brothers Maurice Gibb and Robin Gibb.

Barry Gibb co-wrote and produced numerous hits with the Bee Gees for more than two decades, selling over 120 million records worldwide. With their 25 albums, they have had 19 hits on the American music charts. Guinness World Records cites Gibb as the second most successful songwriter ever, only behind Paul McCartney. He has influenced singers from diverse genres such as Barbra Streisand, Dolly Parton, and Celine Dion.

Born in Douglas, Isle of Man on September 1, 1946 to a professional drummer, Gibb was raised in Manchester where he became involved in the skiffle craze.

Barry Gibb formed his first band, the Rattlesnakes, in 1955. When his family moved to Australia in 1958, the band evolved into the Bee Gees. They performed their first single, “The Battle of the Blue & Grey”, live on Australian television in 1963. The single “Spicks and Specks” was also a big hit in Australia. The band, however, achieved worldwide fame in 1967, when they moved back to their hometown in England.

The Bees Gees signed a contract with Spin Records and recorded “New York Mining Disaster 1941” in 1967, their first hit single in the UK, which also appeared on the American music charts. The band had a string of hits after that for the next two years. When Robin Gibb left the band in 1969 to pursue a solo career, Barry and Maurice kept the Bee Gees alive and wrote another hit single, “Tomorrow, Tomorrow”. Robin decided to rejoin the band by 1970 and the Bee Gees to rose to superstardom for another decade.

When Maurice died in 2003 at the age of 53, Barry and Robin decided to retire the band’s name after 45 years of activity.

Barry Gibb has been married twice; to Maureen Bates (in 1966), and Linda Gray (in 1970). Although his marriage to Bates was short-lived and the couple divorced in 1970, Gibb and Gray have five children.