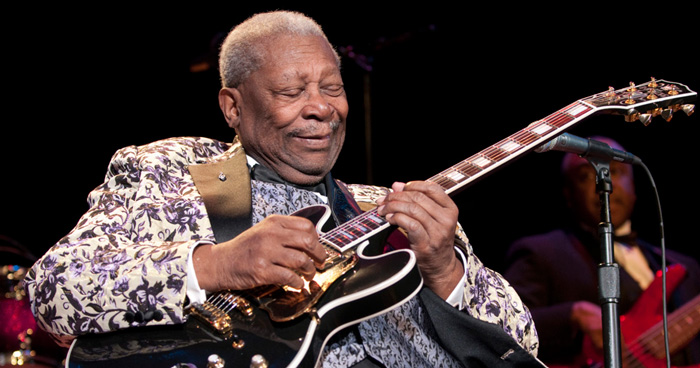 Often described as “The King of Blues”, B.B. King is widely regarded as one of the greatest and most influential blues musicians in history. His distinctive guitar tone and shimmering vibrato has inspired generations of guitar players in blues and rock, as well as other styles of music.

Born Riley B. King on September 16, 1925 in Itta Bena, Mississippi to poor parents, King worked on a cotton plantation and sang in the gospel choir at Elkhorn Baptist Church in Kilmichael, often playing with known local gospel groups such as St. John Gospel Singers. King bought his first guitar for fifteen dollars when he was only 12.

B.B. King moved to Memphis to stay with his cousin and famous blues guitarist, Booker “Bukka” White, who mentored him and gave him his first chance to play for radio. He also cites Sonny Boy Williamson, Blind Lemon Jefferson and T-Bone Walker as major influences. He earned the nickname “Beale Street Blues Boy” after becoming a disc jockey at WDIA, a Memphis-based black radio station.

King secured a record contract with Los Angeles-based RPM Records in 1949. His early recordings were produced by Sam Phillips, who would later found Sun Records. Urban blues were revolutionized by King when he created a new, fluid string bending guitar style with his electric guitar, “Lucille”. According to the famous story, while he was performing Twist, Arkansas, two people starting fighting and this brawl ignited a fire. The compound was promptly evacuated but King forgot to pick up his guitar before leaving the building. He therefore risked his life by getting back in the burning building to retrieve it.

King released his first two recording “Miss Martha King” and “I’ve Got the Blues” in Memphis. His first charting single was “Three O’Clock Blues” (1951), which became his first number-one hit and one of the most seminal R&B records of the era. King’s grandest hit, however, came two decades later in “The Thrill is Gone”, which became arguably  the greatest blues recording of all time. He received a Grammy Award for the song in 1971. A few of his other hits include: “Live and Well” (with Bobby Bland), “Together for the First Time,” and the Grammy-Award-winning “There Must Be a Better World Somewhere”.

For more than six decades, this musical genius has been a source of inspiration to musicians worldwide from diverse genres such as blues, jazz, R&B, rock and pop.

B.B. King has been married twice. He married Martha Lee Denton in 1946. The couple filed for divorce in 1952. He married for the second time to Sue Carol Hall in 1958. The marriage ended in 1966. King has fathered 15 children and has more than 50 grandchildren.