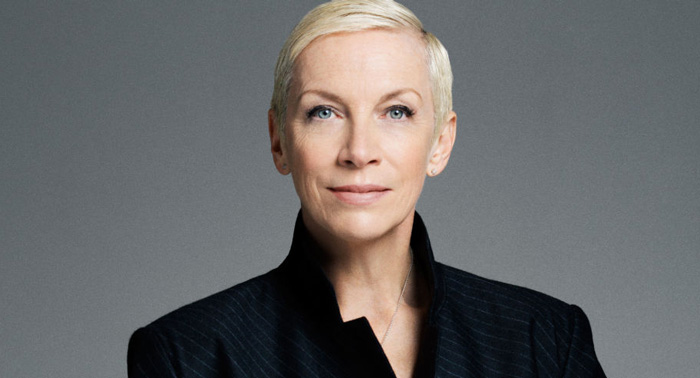 Annie Lennox is a world-renowned Scottish singer-songwriter and musician. A noted philanthropist, she was appointed an Officer of the Order of the British Empire by Queen Elizabeth II in 2011. Lennox is widely regarded as one of the most successful and critically acclaimed female musical artists in the history of Britain. She has sold more than 80 million records worldwide.

Born on 25 December, 1954 in Aberdeen, Scotland, she studied flute, piano and harpsichord for three years at the Royal Academy of Music in London. She became the lead vocalist of the British pop band The Tourists in 1977. It was where she met fellow musician Dave Stewart, with whom she went on to achieve worldwide success in the 1980s as synthpop duo Eurythmics.

Annie Lennox has maintained an independent, self-styled musical style from her Eurythmics days to her more recent solo years. She has steadily resisted press attempts to delimitate her image over the years. She has been a popular figure in the LGBT community and has been praised on multiple occasions for her exceptional social work.

Her controversial music video for “Who’s That Girl” makes a mention of Elvis Presley-styled male version of Lennox and showcases her gender-bending image. She also appeared in Derek Jarman’s 1991 film Edward II and her 1988 hit single with Al Green, “Put a Little Love in Your Heart”, was featured on the soundtrack of the Richard Donner-directed comedy film Scrooged.

Although she named her first solo album as Diva (1992), Lennox has established herself to be benevolent, philanthropic, and indifferent to sexual orientation.

Annie Lennox has won eight Brit Awards, four Grammy Awards, and an MTV Video Music Award. She got the Golden Globe and the Academy Award for Best Original Song for “Into the West” in 2004, which she wrote for the soundtrack of The Lord of the Rings: The Return of the King (2003).

Annie Lennox has been married thrice and has two daughters; Lola and Tali. She has an estimated assets of £30 million as of 2010.